Yoshitomo Nara: It Comes in the Dead of Night – Midnight Thinker 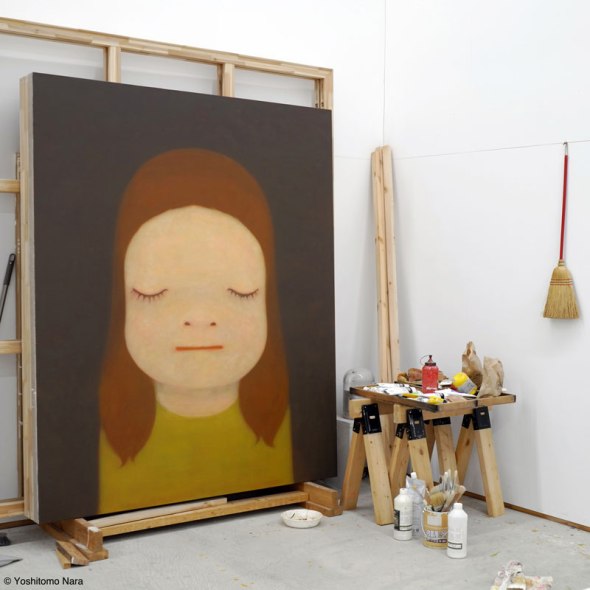 When I focus my thinking, sometimes I slip out of normal time into a world with no clocks, as if in a time warp. In that frozen time, I begin a game of catch with the inspiration that comes from somewhere.

In any case, this game of catch isn’t with another person, but a conversation I have with myself, or a discussion with the universe. I gaze into the mirror, and become more conscious of myself and the world that spreads out infinitely around me.

Living in a countryside so rural that foxes wander about, I feel that eternity when it’s utterly dark outside, sometimes with the moon shining and the stars twinkling. Before I know it, the rock music blasting out of my stereo gets sucked away somewhere, and I hear only the voices of the animals and the sounds of the rain and wind.

To catch inspiration, I open my arms in my imagination, increasing the antenna’s sensitivity. The overwhelming solitude of those moments turns into pleasure, and lets me become one with the night. I pick up my brush before I lose that sensation, and have a conversation with the me that’s inside the picture.

In this city called New York, I will be presenting paintings, drawings, and sculptures born in these moments, along with ceramics I was so excited to create that it felt like a hobby. I hope that my inspiration reaches the audience.

Some seventeen years ago I was still painting the torso as an image of the human presence, when I stumbled into what I call a blind year – a year in which I had no luck, in which no image emerged. At the end of that year I destroyed forty-three bad paintings. As you can imagine, I was by then in a bad way myself, when my wife Anne Madden – herself a painter – brought me to Paris as to a place of discovery. And there indeed I did discover at the Musée de l’Homme, the Polynesian image of the human head, which like the Celtic image which I discovered the following year, represented for me – as perhaps for these two widely different cultures – the mysterious box which contains the spirit: the outer reality of the invisible interior world of consciousness.

In Dublin, now some sixty years ago, the great physicist, Erwin Schroedinger, astonished me with the thought:

Consciousness is a singular of which the plural is unknown and what appears to be the plurality is merely a series of different aspects of this one thing.

Much later in Provence, faced with the Celto-Ligurian head cult of Entremont and Roquepertuse, I asked myself if it were not perhaps this “singular” which so preoccupied our barbarian ancestors in their oracular use of the severed head.

Such a concept of an autonomous, disseminated consciousness surpassing individual personality would, I imagine, tend to produce an ambiguity involving a dislocation of our individual conception of time (within which coming and going, beginning and end, are normally regarded) and confronting this “normal” view with an alternative, contrary sense of simultaneity or timelessness; switching the linear conception of time to which we are accustomed to a circular concept returning upon itself, as in Finnegans Wake.

Likewise, if indeed the aesthetic image in a painting by Rembrandt is illuminated by Joyce’s radiance or whatness, and if that revelation of whatness is achieved by an ambivalence in the role of the paint (involving a transmogrification of the paint itself into the image and vice versa), then these circumstances also may be said to produce that timeless or paratemporal quality, which we instinctively recognize in such a painting.

It would therefore seem that the realization of the aesthetic image or whatness of things, outside and to one side of the linear progress of time, is an essential characteristic of the art of painting and, I imagine, of art generally.

In the modern world, however, we appear to resist such significant integrating imagery, which was more evident perhaps in past cultures, wherein people seem to have regarded the passage of time rather more ambivalently, as being at once related to their personal predicament and to a larger cosmology.

It would appear that this ambivalent attitude to time was especially linked to the prehistoric Celtic or Gallic world, and there is further evidence that it persists to some extent in the Celtic mind today. It is consistent, I think, with Yeat’s tragic view of life – an essentially cosmologic and aristocratic attitude in opposition to the narrow expediency of the “greasy till”:

We Irish, born into the ancient sect
But thrown upon this filthy modern tide
And by its formless spawning fury wrecked
Climb to our proper dark, that we may trace
The lineaments of a plummet-measured face.

In my own small world of painting I myself have learned from the canvas that emergence and disappearance – twin phenomena of time – are ambivalent, that one implies the other and that the state or matrix within which they co-exist dissolves the normal sense of time, producing a characteristic stillness, characteristic of the art of painting.

After a number of years I recall Beckett’s Watt, regarding from a gate the distant figure of a man or a woman (or could it be a priest or a nun?) which appeared to be advancing by slow degrees from the horizon, only surprisingly “without any interruption of its motions” to disappear over it instead. Here going is confounded – if not identified – with coming, backwards with forwards. The film returns the diver to the divingboard. The procession of present moments is reversed, stilled.

Elsewhere in Finnegans Wake does not the fallen Finegan become “Finn Macool lying beside the Liffey, his head at Howth, his feet at Phoenix Park, his wife beside him, watching the microcosmic ‘fluid succession of presents’ go by like a river of life”?

And is not Yeats’s circular lunar system of re-incarnation – the winding stair of Thoor Ballylee, climbed and descended repeatedly – itself a cosmic arrangement of this fluid succession of presents, of time-consciousness in this profoundly Celtic sense? Is this indeed the underlying ambivalence which we in Ireland tend to stress; the continual presence of the historic past, the indivisibility of birth and funeral, spanning the apparent chasm between past and present, between consciousness and fact?

Well that is what I do – I draw. Drawing is a process of making equivalents  – of engaging in the world physically and emotionally – of casting your mind out and grasping what you see. To me it’s as natural as walking or talking – I have been doing it since I was 11 – every day – I cannot explain any one drawing as it depends on the one before. I suppose this is the way I see the world – it’s the closest I can get to reality. (read)

It is a give-and-take between an idea, what one might call “text”, and what is recorded using the medium as “subtext”. I have to ask myself what I expect from painting: should it be subservient to my ideas or a queen that I have to serve? The text, which I regard as a private matter, must be able to stand being dragged diagonally across the canvas. If it loses something along the way, so much the better, since it then gains something that it may have urgently needed: sensuality and a truth that is rooted in non-verbal space.

Lucien Freud: the model & the picture

Since the model he so faithfully copies is not going to be hung up next to the picture … it is of no interest whether it is an accurate copy of the model. Whether it will convince or not, depends entirely on what it is in itself, what is there to be seen. The model should only serve the very private function for the painter of providing the starting point for his excitement. The picture is all he feels about it, all he thinks worth preserving of it, all he invests it with. If all the qualities which a painter took from the model for his picture were really taken, no person could be painted twice.

Marcel Dzama (born 1974 in Winnipeg, Manitoba, Canada) is a Canadian artist living in New York City known for small-scale ink and watercolor drawings of human figures, animals, and imaginary hybrids. Dzama has a BFA from the University of Manitoba. Dzama typically uses a muted, melancholic color palette of browns and greens, drawing from nature and army textiles. He often employs root beer base as an artistic medium. In addition to ink and watercolor drawings, Dzama also creates many collages. A recent departure for Dzama is the move into large-scale polyptychs, sculpture, and video. Dzama is known for providing the cover art to a number of major albums, notably The Else by They Might Be Giants, Guero by Beck and Reconstruction Site by The Weakerthans. His costume designs can also be seen in the music video for the Bob Dylan song “When the Deal Goes Down.” Since 1998, Dzama has been represented by the David Zwirner Gallery in New York City, at which he has had numerous solo exhibitions. In 2006 he had a major exhibition at the Ikon Gallery in Birmingham, England, which traveled to the Centre for Contemporary Art in Glasgow, Scotland. Dzama co-founded the Royal Art Lodge artist collective in Winnipeg in 1996. McSweeney’s has published two collections of his work, The Berlin Years in 2003 (reprinted in 2006) and a follow-up, The Berliner Ensemble Thanks You All, in 2008. His works are held in the collection of the Tate museum.

Frank Auerbach: the truth is not a painting

The first thing I wanted to do was to state the truth, and the point about the truth is, the truth is not a painting. The truth is something that hasn’t been captured by painting yet. As soon as you do something that looks like a painting there are all sorts of ways of making it work that precisely because it’s already been done, are presented to you. But you’ve got to venture into unknown territory where you’re trying to state the thing, without having these hand-holds and grips and assistance of previous practise and so when the paintings became these strange lumps of thick paint, I was very interested and I pursued that line. (read BBC interview)